St Paul was not the twin of Minneapolis. For me it was more like a distant cousin.  A gray old city way over there. I grew up on the west side by Medicine Lake, way over here. 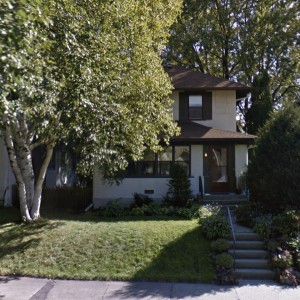 I visited  downtown St Paul only once with my mother to buy tickets to see the Monkees during their 1967 US Tour.  She drove the unfamiliar streets to the Field-Schlick Department Store, my sister and I in the back seat, already planning our bell bottom outfits we would be needing in August for the concert.  The store seemed shabby compared to Dayton’s, the street names Kellogg, Wabasha, Cedar unfamiliar.

It was 1982.  The same year Phil and I were married.  Interest rates were 18% on home mortgages. So why not buy a house? We didn’t think that was such a big deal now that we had our first real jobs –he a fisheries biologist and me an environmental planner for a utility company.   The problem was where? He was working at a field station in Red Wing and I worked in downtown Minneapolis. What could be half way?

I had fallen in love with the curvy streets of Tangletown near Macalester College. Our friend Stuart had a house there and shared it with a few mutual friends. It seemed perfect with its natural woodwork,  front porch and everything that surrounded it.  You could walk the tree lined streets to the Mississippi River, and gawk at the mansions along Summit Avenue, walk to the hardware store, browse the shelves of Hungry Mind bookstore.  The whole scene dripped with history and charm, things I didn’t see in the rural township where I grew up.

We found a stucco two story on Sargent Avenue a block from Snelling and St Clair.  With woodwork. A front porch. An upstairs sunroom. Potential! We invited my folks to join us for a preview before closing. Mom brought her measuring tape and her ideas for window treatments. It reminded her so much of the south Minneapolis home of her youth.  Dad brought his powers of observation and a frown of concern.

“Can you get out of this deal??”  after listing the house’s many flaws. The roof (poor), the back yard (a mess). The carpeting (worn). The furnace (archaic). The basement (damp).

“You could buy a brand new house in Plymouth for what they’re asking.”

I was crushed. Couldn’t he see the possibilities? Even though I never meant to disappoint my parents,  and had trusted Dad’s judgment above all, I had Phil now. Phil who had grown up in a gracious Victorian house and had learned “fixing” from his father.

“But Dad, we can fix it up.” My words did not sound convincing. And little stabs of doubt poked me.  Were we paying too much?  Formaldehyde insulation, was that a bad thing?  Phil reassured me that everything would be fine. We would make it ours.

On moving day, friends and extended family helped carry in the few pieces of furniture, scrubbed baseboards, raked the back yard, uncovered strawberry plants and Iris, but not much grass. No one mentioned the fact that there was a gash where the closet door should have been in the pink master bedroom or that the back stairs smelled of animals.

Room by room we transformed the imperfect house into home.  We learned to wallpaper, stripped and sanded the floors, replaced the broken sash cords, painted the porch floor–recording each improvement in a small red notebook. Our before was transformed in to an after.

Friends came to note our progress and projects. We met the old couple on the corner at their estate sale.  They were selling a lifetime of treasures to down-size, although we didn’t really call it that, then.  We walked to the corner drug store to get ice cream, ate breakfast at the St Clair Broiler, discovered Napoleon’s blueberry muffins  and the Mississippi Market food coop just  down the alley.  We harvested our rhubarb, had fires in the fireplace, ate on the front porch and had neighbors over for white zinfandel.  Outside the bridal wreath sent showers of white petals, hostas divided and spread, a wild rose bloomed pink.

Four years later we carried our first born in to the side door of the house on an early June evening.  The widows who lived across the alley in the apartments said, “Make sure we hold that baby before she walks.”  I thought, don’t worry, plenty of time for that. It will be an entire YEAR!  I was worried about getting through the first night.

Over time the house came alive. The floor boards creaked with the beat of our feet, the walls held us close, the walls absorbed the odors of daily living. We were a family here.

Phil planted a Canadian cherry tree in the back yard to mark Mae’s birth.  I hung our clothes on the line and Phil hung a little tykes swing between the poles. The sidewalks  around us became familiar routes to the park, to see friends, to pick up pizza.  We watched the green spire linden tree on the boulevard grow taller, a replacement for the arching elm that died from disease.

Our son came three years later.  Mae moved out of the nursery and had books and an aquarium in her pink floral bedroom.  Baby was carried in a backpack or tucked in his stroller to follow his sister down the block, splashed in the wading pool, toddled to the sandbox.  We hosted a block party, backyard BBQs, Christmas eve. 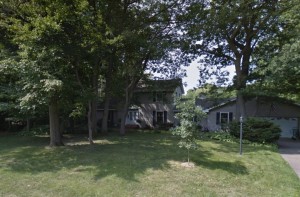 Could we ever find a new home that could be ours?

Would we stay on Sargent Avenue forever now that Phil and I worked in Minneapolis?

The seed was planted.  Just before Mae turned five, and Gar turned two, we moved to the suburb where my parents lived, where I had grown up. After much searching, we found a two-story colonial on a quiet street, situated on a wooded lot, near an elementary school. We could drive to see Grandma & Grandpa in five minutes.

Closing and the move coincided with the Boundary Waters canoe trip Phil planned each year for the Memorial Day long weekend. After moving the last box and making sure the beds were set up, Phil went north and I traveled back to St Paul to host Mae’s 5th birthday party with her preschool friends.  We went to a nature center, had cupcakes and a planned visit from a rabbit who tried to hop away from the shrieking five year olds who each wanted to “hold” it. Hosting a child’s birthday party was never a joy for me, and this one during move-in weekend when I had so much waiting for me, I was harried and overwhelmed.  When I dropped off one of the little guests who lived on our block, parked in front of our house, that was no longer ours, I knew we had made a terrible mistake.

I wanted to walk through the door to the familiarity of home, to find the rooms just as they were yesterday.

Instead I drove north past Grand Avenue and then Summit, the bikers and joggers traveling the boulevard, past Arthur Murray dance studio, O’Gara’s Pub, to merge on to west 94, this time knowing that St Paul was no longer my home. I had traded the vintage charms of Mac-Groveland, for the wide streets and green lawns of a suburban life.  I glanced back at my two sleeping children  reminding myself of the good things that awaited.

Janet Sterk is a therapist, coach, and writer.

celebrating the gift of each ordinary day

Boomer lit . . . plus movies, art, music and other thoughts on boomer-ness

(Somewhat) Daily News from the World of Literary Nonfiction

An inventory of the meaningful life.

The best longform stories on the web